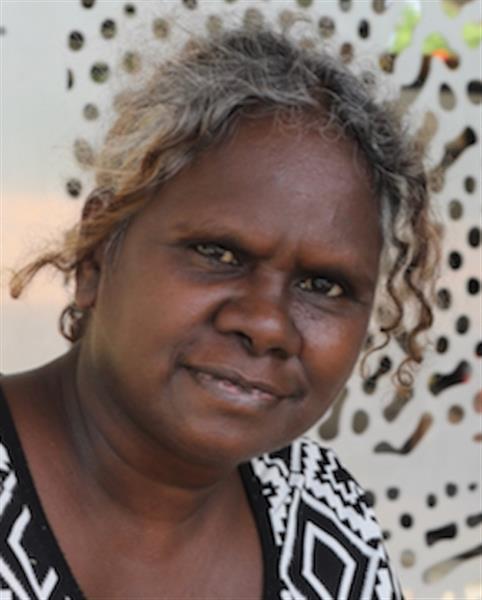 LidwinaTepomitari Puruntatameri was taught to paint by her father, Romuald Puruntatameri. As a 14 year old, she would come home from school and work with him, painting his spears.  Lidwina Puruntatameri has worked at both Nguiu Adult Education and Munupi Arts & Crafts doing bark painting, screen printing, works on linen, etchings and linocuts.  In 1993 Lidwina Puruntatameri won the Award for New Medium at the National Aboriginal and Torres Strait Islander Art Awards in Darwin, providing recognition for her exceptional skills in etching.  In recent years Lidwina has worked mainly on canvas using ochres and her works sought after. Lidwina’s  father, Romuald Puruntatameri, is represented in the Museum and Art Gallery of Northern Territory Collection and her grandfather, Paddy Teeampi Tepomitari Puruntatameri, and her aunt, Rosina Puantulura, both carvers, are represented in the Melbourne Museum Collection. Lidwina’s work is represented in many Australian and International private and public collections.

Jilamara DesignDuring ceremony on the Tiwi Islands a series of ‘yoi’ (dances), are performed; some are totemic (inherited from the person's Mother) and some serve to act out the narrative...