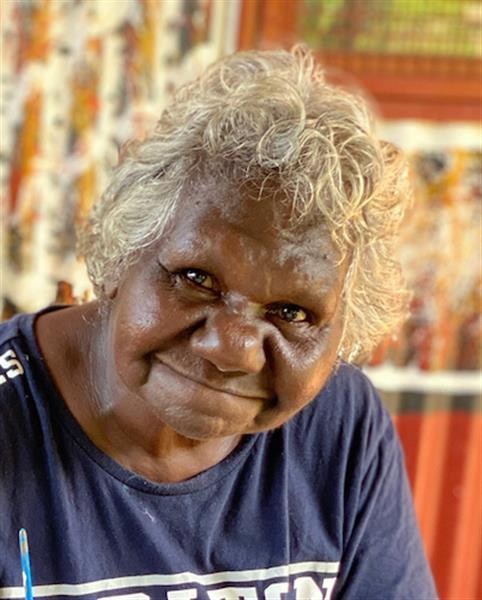 Virginia Galarla was born in 1951 at Wurrumiyanga.  Her maiden name was Pangiraminni.  She went to the catholic primary and high school at Wurrumiyanga. When she  turned 18 she got a job at the health centre and in 1972 she transferred to the Leproseum at East Arm in Darwin. In 1973 she got married and went to Maningrida  with her husband for 1 year.In 1974 they returned to Wurrumiyanga where they had 5 children.  The family moved to Pirlangimpi in 1979.After her family grew up she returned to the work at the Health Centre in Pirlangimpi until she retired in 2010.When she retired she was sitting at home making baskets as she didnt know about the Art Centre until 2104 when she joined and started to paint. Her paintings depicting seasons, cermonies, bush foods, bush medicine, insects, ceremonial objects etc  have continued to evolve and her are sought after.

Murantingala & Tapalinga Murantingala is the name for the 'morning star', or the planet Venus. Throughout Tiwi history they have used this star as a compass point for navigation and...